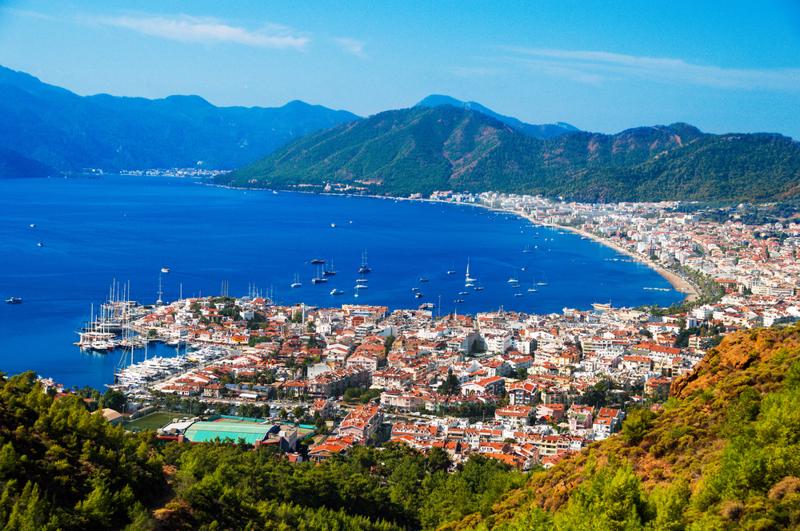 Turkey is often regarded as a cheap travel destination that’s packed full of British tourists looking for a boozy holiday but without paying for the expense of Ibiza.

While you may find this in places like Bodrum, Turkey is 783,562 km² big, and still retains much of its history and ancient traditions.

It also has a cuisine that is unlike anywhere else in the world, iconic landscapes, stunning beaches, and an ancient site that is regarded as one of the seven Ancient Wonders of the World.

If you’ve been on the fence about visiting Turkey and need a little nudge out of the door, then be sure to read our 10 reasons to visit Turkey to understand why this majestic country should be near the top of anybody’s travel bucket list.

To Explore Istanbul: A Vibrant City That Rests in Two Continents

Istanbul is a city unlike anywhere else in the world. For one thing, it resides on the border of two continents, Europe and Asia, and aside from being able to put one foot in Asia and one foot in Europe, there are many other reasons to visit Istanbul.

Istanbul was once known as Constantinople, the capital of the Roman Empire before it was seized by the Ottomans in 1453.

When the Ottomans took over, they turned the beautiful Hagia Sophia into a mosque, opened up The Grand Bazaar, the world’s largest covered market, and built several stunning palaces in Istanbul.

The remnants of these two historic empires are still prominent in the city today. For history lovers, they will love exploring the ancient streets, or even under the streets, in one of the many of the city’s cisterns.

Cappadocia is a unique region in Turkey, known for its vast desert landscape housing distinctive rock formations known as fairy chimneys. These fairy chimneys were once natural caves formed by weathering, but centuries ago, they were carved out and used as houses for settlers.

Hiking in Cappadocia is one way to see these unique rock formations, but to really experience the vastness of this landscape, is from above.

There are also hundreds of hot air balloons that take flight at once, filling the skies one after the other. There is nothing else quite like it. It’s definitely a once-in-a-lifetime experience.

A Hammam, or Turkish Bath, is a relaxing experience that can only be found in Turkey (mainly Istanbul).

A Hammam is a steam bath or public bathing space introduced during the Ottoman era, which they adopted from the Romans. It’s a huge part of Islamic culture and is seen as a popular therapy method of cleansing – not just the body, but the mind.

As well as being a relaxing experience, a Turkish bath house is an excellent example of Roman and Greek architecture, with curved arches and mosaic tiles throughout.

To Visit The Oldest and Largest Covered Market in the World: The Grand Bazaar

The Grand Bazaar is a maze of street stalls selling everything from Turkish towels and Turkish lamps, to rugs, antiques, and sweet treats like baklava and Turkish delight.

As well as getting all the souvenirs you could possibly want or need, the Grand Bazaar is also a place of historical importance.

It began in 1455 when the Ottomans captured Constantinople (now Istanbul). The market was the main point of trade in the Ottoman Empire, where everything from gold and precious gems to textiles and food products was sold.

It is comprised of 61 streets and over 4,000 shops. Truly, The Grand Bazaar is a magical place that has to be seen to be believed and one of the best places to visit in Istanbul.

Enjoy The Beautiful Beaches on The Turkish Riviera

The diversity of Turkey is one of its main drawing points. You can be fully immersed in ancient ruins, climb craggy snow-capped mountains, hike through seemingly endless deserts, or if you want relaxation, bathe on a soft sand beach on the Mediterranean ocean.

The Turkish Riviera, or Turquoise Coast as it’s often named, is 220km of jaw-dropping coastlines, quaint historical towns, and world-class resorts. The beaches are a wonder to behold, especially the beaches around Antalya.

Antalya is often the place to base yourself if you want an affordable beach vacation in Turkey. It’s not only close to the coastline but there are many fun and exciting things to do in Antalya.

The ocean in the Riviera, as you might expect, is stunning turquoise and is the perfect place to cool off in the warm Mediterranean sun.

If affordable beach holidays are on the agenda for this year, then the Turkish Riviera is one of the best reasons to visit Turkey for a beach holiday.

Ignite Your Culinary Senses With The Delicious Turkish Cuisine

Many people think of Turkish food as just kebabs. But in fact, there are many different dishes that can only be truly enjoyed when visiting Turkey.

Turkey is particularly good at desserts and sweet treats. Baklava, a pastry dish with pistachios and sugar syrup, is one of the most popular Turkish sweets and you’ll find it everywhere in Turkey, especially in Istanbul.

Turkish rice pudding is also a delicious local delicacy you must try. Some desserts are also a little bit odd, such as Tavuk göğsü, a milk pudding with chicken in it (yes you read that right, chicken).

As well as desserts, Turkey has several savory dishes you should check out. There’s Börek, a flakey pastry dish with meat and sometimes spinach. Then there’s Sarma, otherwise known as stuffed vine leaves. You should also try manti (a type of Turkish ravioli), pide (a pizza without the cheese), and gozleme (similar to a savory crepe).

If you’re visiting Istanbul, you absolutely need to try the stuffed mussels!

I’m sure by now you’ve realized that trying all the food in Turkey could take you weeks. This is definitely one of the top reasons to visit Turkey.

Savor the flavors of Asia and Europe on a food tour of Istanbul and conquer the cuisines of the city’s 7 hills. Follow a local to neighborhood cafés to find Kurdish food, typical drinks, and more. Reserve your place here.

If there is one thing Turkey is known for, it’s the people’s hospitality. Turkish people are known to be extremely friendly, and that is not because they are always in a good mood from living in such a gorgeous country.

Turks believe that guests should be treated as if they were sent by God. While it might be a little bit unusual in other countries to just invite acquaintances into your home, it is not uncommon in Turkey, especially if you are in the smaller towns.

Though this usually doesn’t happen in big cities like Istanbul, Turks will most likely always greet you with a smile and ask you about your life!

Turkey was once home to the Greeks, the Byzantines, the Lycians, the Romans, and the Ottomans. With so many Empires colonizing the lands, you can expect they have left their fair share of historical landmarks across Turkey.

One such example of an important historical site in Turkey is Ephesus. This once great city was formed by the Greeks and then taken over by the Romans.

The ruins are some of the best preserved in the country, especially the Temple of Artemis, Library of Celsus, Temple of Hadrian, and the huge Roman Amphitheater that was once large enough to hold 24,000 spectators.

Ephesus was declared a UNESCO World Heritage Site in 2015 with the Temple of Artemis regarded as one of the seven Ancient Wonders of the World.

Be Amazed At the Natural Wonders Such As Pamukkale

As well as historical wonders, Turkey is also home to several natural wonders. If the rock formations of Cappadocia don’t do it for you, then perhaps visiting Pamukkale is another good reason to visit Turkey.

The area is known for its startling white travertines, made of a carbonate mineral that was deposited here after it was carried by flowing water from Cal Mountain.

The travertines are a stunning display of natural beauty, but they are also filled with warm, rich mineral water that you can actually swim in.

At the top of the Travertines are the ruins of Hierapolis, an ancient Roman city. Here you can see the ruins of the well-preserved North Gate, the amphitheater, the tomb of ​​Philip the Apostle, and the Roman Baths.

Be Kind to Your Wallet: Turkey is Excellent Value For Money

It’s no secret that travel is becoming more and more expensive these days, especially after the fuel crisis of 2022 jacked up the price of airfares.

Tours and accommodation in Turkey are your biggest expenses, but aside from that, you’ll be paying next to nothing for everything else. You can have a really delicious meal for less than $5, even in touristy places like Cappadocia or Fethiye.

Transport is also incredibly cheap. A long-distance bus from Istanbul to Cappadocia is less than $20 USD, and internal flights can also come to less than $60 USD if you book at the right time.

You should also make sure to fill up on ice creams, which came to about $0.30 when we visited.

If affordability isn’t a good reason to visit Turkey, then we don’t know what is.

So there you have it, 10 reasons to visit Turkey. Whether you’re a culture vulture looking to get to know a new way of life or a history buff in need of fascinating historical landmarks to explore, you’ll find that there is plenty of reason to pack your suitcase and head over to Turkey.

Looking for a tour of Turkey?

Consider this 15 day Absolute Turkey tour with G Adventures. This comprehensive tour of Turkey combines history and beaches, man-made wonders and natural phenomena, as well as a vibrant and welcoming culture. Begin your trip roaming the palaces and mosques of Istanbul before journeying into the bizarre as you explore otherworldly Cappadocia, the white cliff waterfalls of Pamukkale and the bustling bazaars of Istanbul. Click here to learn more.

Where in Jeonju did they shoot ‘Twenty-Five Twenty-One’?

20 Photos to Inspire You to Visit Leavenworth, Washington