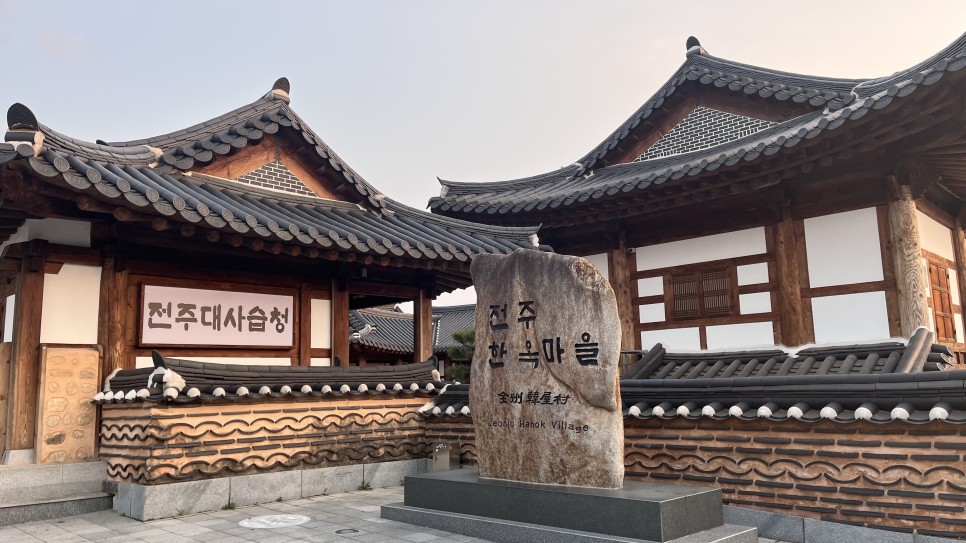 It’s still somewhat cool and pleasant to walk during the night, but it might get warmer in August. Today’s post is about walking Jeonju Hanok Village at night.

If you can, I suggest visiting Jeonju Hanok village during the weekdays to avoid the crowd. At a weekday night, it’s rather quiet and it feels as if I’ve entered a movie.

Walking through the cooler night breeze

The slight humidity and the yellow illuminations heighten the summer mood in Jeonju Hanok village. In summer, the sun sheds light on the streets of the Hanok Village until around 8PM. It seems most stores are also open until 8PM. I wanted to immerse myself in the summer mood, hence I just walked instead of spending the evening inside. Around seven, breeze started blowing, cooling down the streets.

I waited for the temperature to go down a bit at the rest area across the Omokdae travel information on the Taejoro street.

In the evening, the yellow illuminations are lit up. The humid air and the illuminations seem to stress the elegance of the old wooden hanok buildings. The moon-shaped illuminations elevate the mood. Standing in the middle of a quiet street in Jeonju Hanok Village, I feel as if I’ve stepped into another world.

I love such unstructured harmony of grasses and flowers. Summer set in everywhere, in the old trees and their lush green leaves.

Jeonju Hanok Village, in its current form, was created in 1910. The locals are working hard to maintain the original beauty and heritage of the Hanok Village.

Jeonju Hanok Village is not only about the elegant Hanok buildings. The village also conveys the local traditional culture: hansik (food), hanji (paper), pansori (musical storytelling), and many more. Various cultural experiences are open to the visitors.

Walk along the Jeonjucheon River

The view on the trail that runs along the Jeonjucheon river displays the harmony of Hanok buildings, stone-pavement, illuminations, and trees. The older the Hanok building, the more elegant it seemed. An old guy fanning in an alleyway made the summer evening scene all the more vivid.

I crossed the Omokgyo Bridge that leads to the National Intangible Heritage Center. The flags on the bridge looked more grand than usual.

On the opposite side, on the stone wall were the novels that won the prestigious Honbul Literature Prize and the readers’ comments. The City of Jeonju not only supports arts, but also try to share them with the locals.

The Hanbyeok Tunnel in ‘Twenty-Five, Twenty-One’

I kept walking the trail and arrived at a tip of Jeonju Hanok Village. The trail leads to the Hanbyeokdang Pavilion and the famous Hanbyeok Tunnel, which appeared in the television series ‘Twenty-Five, Twenty-One’.

The night walk through Jeonju Hanok Village is nice with anyone or even alone. I suggest trying the walk before it gets too warm even at night!

21 Places to visit in London to Create Memories that Last