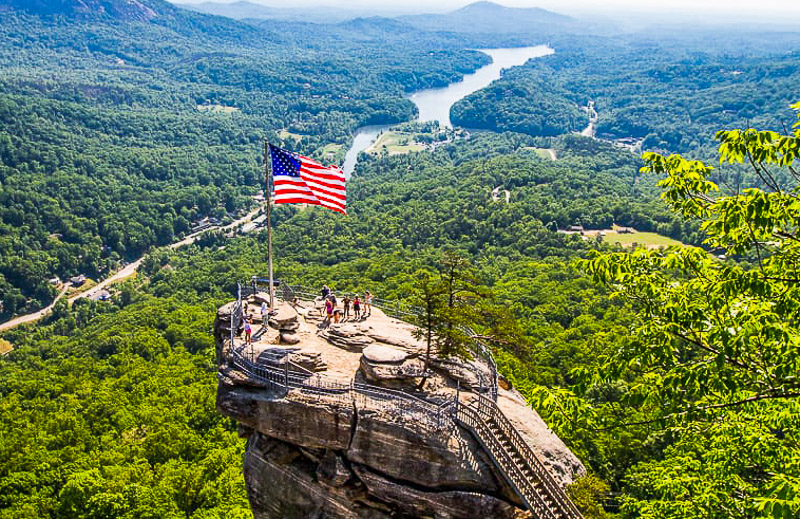 Chimney Rock State Park is an area of outstanding natural beauty and is one of the most popular mountains in Western North Carolina.

This 500-million-year-old monument is the perfect place for nature lovers and hikers to experience the fresh mountain are of Rutherford County, see rare, native plants and fauna, and gaze upon the serene landscape from the top.

Fortunately, getting to the top is easy, since the are 499 steps from the park entrace to the viewpoint at the top.

Don’t worry though, it’s completely worth it once you reach the top. Not only do you gain a sense of achievement, but the panoramic views from the observation deck are just magnificent.

We visited Chimney Rock State Park as part of our USA road trip with my parents. It was one of our favorite things to do in North Carolina with family as we all enjoyed different aspects of the hike.

For my dad, being a big movie buff, enjoyed seeing the film set of Last of the Mohicans staring Daniel Day Lewis, which made the Chimney Rock attraction so famous by the movie. My dad loved the connection that the Chimney Rock area has to that movie.

But where is Chimney Rock and how do you climb it? What do I need to know before I go? Well, if you’re asking all these questions you’ve come to the right place.

In this guide, I’ll be telling you everything you need to know about Chimney Rock so you can have the best experience.

Where is Chimney Rock State Park?

Getting to Chimney Rock is easy. Because the drive time from downtown Asheville is just 40-minutes, it’s one our top suggestions for things to do near Asheville.

It is located in the Village of Chimney Rock and easily accessible from highway I-40.

From Charlotte it’s a 2-hour drive, from our home in Raleigh it’s 4 hours, and it’s only a 5-minute drive from one of our favorite places to visit in North Carolina, Lake Lure.

Click the map above for Chimney Rock directions from your starting point.

What is Chimney Rock?

It was discovered by Lucius B. Morse who opened it as a private park in 1902. The entirely of Chimney Rock State Park spans for 6,800 acres and is most famous for the granite “Chimney Rock” which is so named because it looks like a rock chimney.

The park is also home to one of the highest waterfalls in North Carolina. The Hickory Nut Falls is 404 foot tall and features a balanced rock known as “Devil’s Head” at the summit of the falls. Some say the rock looks like the head of a devil, which is how it got its infamous name.

The park is famous for its hiking trails, breathtaking views, and waterfalls.

Things to Do in Chimney Rock State Park

1. Climb To The Top of Chimney Rock

The number one thing to do here is to climb to the top of the rock on the Chimney Rock hike.

From the top you get amazing views of Hickory Nut Gorge, Lake Lure and The Blue Ridge mountains – it’s truly one of our favorite views of the North Carolina mountains!

The Outcroppings Trail is a series of staircases and lookout points allowing you to climb to the top of Chimney Rock itself.

I think this is a relatively moderate hike up to the top – 499 steps to the top – which my 76 year old father and 69 year old mother managed just fine.

It’s a nice cardio and leg workout, although we did have a few stops along the way to catch our breath and admire the views.

For those that are physically challenged, an elevator was built into a hole in the rock face that conveniently allows all guests easy access to the top of the Chimney for its spectacular views.

Along the way, be sure to visit the Grotto, Opera Box, Subway and Pulpit Rock.

And there are a couple of walking trails that take you up to the mountain above Chimney Rock which offer incredible views you won’t see anywhere else in the Park.

The views are definitely the reward of this hike. The view spans for miles, across to the Blue Ridge Mountains and Carolina Piedmont in the distance.

Craig ran up one to take the below photo for you.

Probably the most popular of the Chimney Rock trails is the Hickory Nut Falls trail which takes you to the bottom of one of the tallest waterfalls east of the Mississippi River.

This is a beautiful and moderate 1.4 mile round trip trail and you are rewarded with a magnificent view from the base of this 404-foot waterfall that was featured in the epic fight scene from the film, The Last of the Mohicans.

We enjoyed this hike which weaves through a mix of Oak and Hickory trees, and we recommended it for families with small children and for grandparents.

There are a few moderate uphill sections and a small set of stairs at the base of the falls, so we don’t suggest this for strollers or wheelchairs.

Along this trail are picnic tables, benches, and resting areas are conveniently located offering you a chance to rest and catch your breath.

The spectacular view of the waterfall is totally worth it.

After your time hiking and exploring Chimney Rock State Park, head into Chimney Rock Village for shopping and perhaps a coffee or lunch break.

If you don’t have the energy to travel too far, there is a cafe at the park entrance called Old Rock Cafe, which is located near the gift shop, Cliff Dwellers Gifts.

You can also get a picnic from Old Rock Cafe to take with you on the trail if you forget.

This village is a small one street mountain town with stores and restaurants perched on the banks of the Rocky Broad River, tucked in the Hickory Nut Gorge.

The Broad River runs alongside Chimney Rock village and is a gorgeous little oasis on a hot sunny day.

Sit on the deck of Riverwatch Bar & Grill with a nice glass of champagne while your kids scramble over the rocks below.

I didn’t do it on this trip, but I did on a previous trip with other adult friends – ah the serenity of a glass of wine uninterrupted by cries of your kids of “Moooommm”.

The water was running pretty fast here so I’m not sure about swimming. I think you can find little pools of water that will help cool you down.

We were lucky to catch the Symphony of Rutherford County annual dinner and symphony event. We grabbed a picnic dinner and headed down to the Gathering Place in Chimney Rock Village to watch it.

Sadly due to my bee sting incident that day, we were a little late in arriving.

We only managed to catch a few of the songs at the end, but it was spectacular.

We were starting to get into it with the beautiful rendition of Amazing Grace and Danny Boy and wished they kept playing. Those bagpipes made the mountains behind sing.

It was such an exquisite venue for an intimate music venue with the locals, and a nice way to cap off a visit to the Chimney Rock area.

There are regular events held at the park. Be sure to check the events page before visiting to see what’s on. One of the most iconic events if the Flock the Rock event.

Rock climbing is a popular activity at Chimney Rock State Park. The park offers lessons to both beginner and advanced climbers through Fox Mountain Guides and Climbing School, so if you don’t feel confident going alone, you have an experience instructor with you.

You can climb in the park all year round, weather permitting, and it’s a very family-friendly activity. The youngest age for this activity is 6-years-old, so the whole family can do it.

The Rumbling Bald Climbing Access is a hidden gem in the states. It’s a world-class bouldering and technical rock climbing area and has over 1,500 bouldering problems for experienced boulderers to tackle.

The Rumbling Bald is accessed by the 1.5 mile looped Rumbling Bald Trail, and a permit must be given by the state park (though permits are free to obtain).

6. Walk the other unique hiking trails

Though Chimney Rock is the crown jewel of the park, it slightly overcasts the other hidden gems that this park has to offer. There are several hiking trails and woodlands to explore, so don’t skip these other trails if you have more than half a day to explore the park.

For family-friendly trails, consider the Great Woodland Adventure Trail. It’s a 600 meter loop trail following Grady the Groundhog, the Park’s Animal Educator, who offers information about the species who live in the park. This is a fun and educational trail for kids!

The Skyline Trail is a 2-2.5 hour hike that leads from Exclamation Point and into the backcountry. The trail follows the ridge and gives great views of the Hickory Nut Gorge and Peregrine’s Point. It passes through woodlands, wildflowers, and Falls Creek, as well as the top of the Hickory Nut Falls.

The Four Seasons Trail takes you off the beaten path from the lower parking lot and up through the forests. It’s a moderate to strenuous hike that climbs up 400 feet through forest to the Hickory Nut Falls Trail.

It gets its name because every season has something special to offer. In Spring, it blooms with wildflowers, in the summer, it’s full of lush groves and attracts Swainson and Hooded Wabler birds to the area. In the autumn it is lit up in oranges and yellows, and the winter brings a more rugged landscape.

The state park is home to some native and rare species of plants, fauna and wildlife. You can learn all about it at Animal Discover Den, located near the exit of the park.

In the Den, you’ll see animals who were rescued from the park and are being cared for in the Discovery Den. You’ll get to learn new animal facts and visit the resident possums and groundhogs.

Visitors must purchase a park ticket from the ticket plaza at the Park Entrance. Entrace fees cost:

The park is open all year round. The open hours are as follows:

Chimney Rock has all the facilities to make your visit comfortable. You’ll find restrooms at the Meadows near the Ticket Plaza, on the upper parking lot near the Outcroppings trail and in the Sky Lounge at the top of Chimney Rock.

There are several picnic tables in the park. The main ones are at the base of Hickory Nut Falls and at Exclamation Point.

Events are held every week, including guided hikes. There is no camping aloud at Chimney Rock.

Here’s what people usually ask us about Chimney Rock NC:

Why is Chimney Rock NC famous?

It is famous for its 499 steps up to the top of Chimney Rock. It was also the setting for the movie, Last of the Mohicans.

How much does it cost to go up Chimney Rock?

How long is the hike to Chimney Rock?

Depending on which trail you take, the Outcroppings Trail and the Exclamation Point Trail usually takes about 25 minutes.

So there you have it, this is your complete guide to Chimney Rock NC. I hope that this guide helped answer all your questions about the state park and helped you plan your visit.

If you do have any more questions, let us know in the comments!

How to create an amazing life in 15 minutes a day